Lionel Messi full name is Lionel Andres Messi Cuccittini bron in 24 June 1987, in Rosario, Santa Fe, Argentina is a latrine American country. He is a professional footballer who plays for Spanish club FC Barcelona and the Argentina national team. He is a forward and serves as captain for Argentina.

His father’s name is Jorge Horacio Messi, was a factory steel worker, and mother’s name is Celia Maria Cuccittini, was a part-time cleaner. His paternal great-grandfather name is Angelo Messi originates from Ancona the Italian city and emigrated to Argentina in 1883.

Lionel Messi  has two older brothers, there name is Rodrigo and Matias, he has a sister her name is Maria Sol.
When messi was 11 years old he was diagnosed with a growth hormone deficiency. Argentina Local team River Plate showed interest in Messi’s treatment, but they were not willing to pay for treatment cost which was $900 a month. Then FC Barcelona offered to pay Messi’s total treatment cost on that condition he moved to Spain. Lionel Messi and his father Jorge Horacio Messi duly moved to Barcelona, where Messi enrolled in the club’s youth academy. 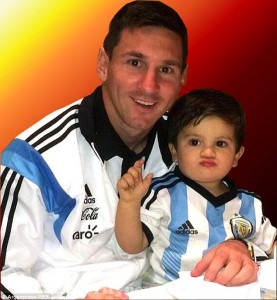 Lionel Messi And His Son

In his personel life Lionel Messi started a deep relationship with a Argentina’s girl , her name is
Antonella Roccuzzo, and the relationship started in 2008. Antonella Roccuzzo is mother of messi’s son. On November 2, 2012, Messi became a father for the first time, and messi added a post on his Facebook page “Today I am the happiest man in the world, my son was born and thanks to God for this gift!”.  Messis son’s name is Thiago Messi. 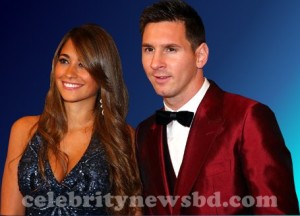 Messi would sign a five-year contract extension with F C Barcelona in December 2012, which will keep him at the club until 2018. And FCB raising his Net salary to €16 million ($21.2 million), which will make him the highest on-field earner in football. 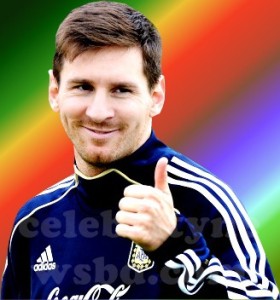