Rahat Fateh ali khan is a professional Pakistani singer , Vocalist, Musician and Recording artist, he performs ghazals, Qawwali and other light music. He is popular as a Lollywood (unofficial nickname of Pakistani film industry based in the city of Lahore) and Bollywood playback singer.

When rahat fateh ali khan was three years old he got teaching Qawwali music by his uncle Ustad Nusrat Fateh Ali Khan, and the age of seven he start formal training with his uncle. At the age of nine he performed first time in public at the death anniversary of his grandfather. In 2004 he was begun as a playback singer in Bollywood with the movie Paap. 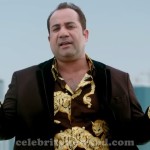