Arjen Robben is a Dutch professional footballer. He plays for the Netherlands national team, and German Bundesliga club Bayern Munich. He is a forward player and usually plays as a left or right sided winger. he is well known for his speed, crossing ability, dribbling skills and his accurate left foot long-range shots from the right wing. He has appeared UEFA European Championships in the 2004, 2008, and the 2006, and FIFA World Cups 2010 and 2014.

Arjen Robben born 23 January 1984 in Bedum, Netherlands. His father’s name is Hans Robben he works as his agent and mothers name is Marjo Robben. on 9 June 2007 he married his girlfriend Bernadien Eillert in Groningen. he has two sons there name is Luka he born in 2008 and Kai born 2012, and a daughter her name is Lynn she born in 2010. 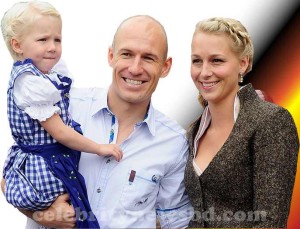 In 1999, Robben started his career with FC Groningen, in 2000-2001 he became player of the year in Eredivisie season. After two years in 2003 he joins Philips Sport Vereniging and played 33 matches and scored 12 goals. In 2004 he join by a leading English clubs Chelsea. on 22 August 2007 he moved to Real Madrid. On 28 August 2009, Robben moved to Bayern Munich for around €25 million.
At the age of 19 Arjen Robben made his international debut in a friendly match against Portugal. He has played 78 matches for the Netherlands national football team. 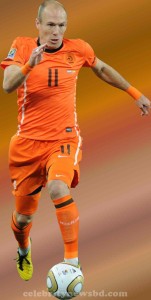